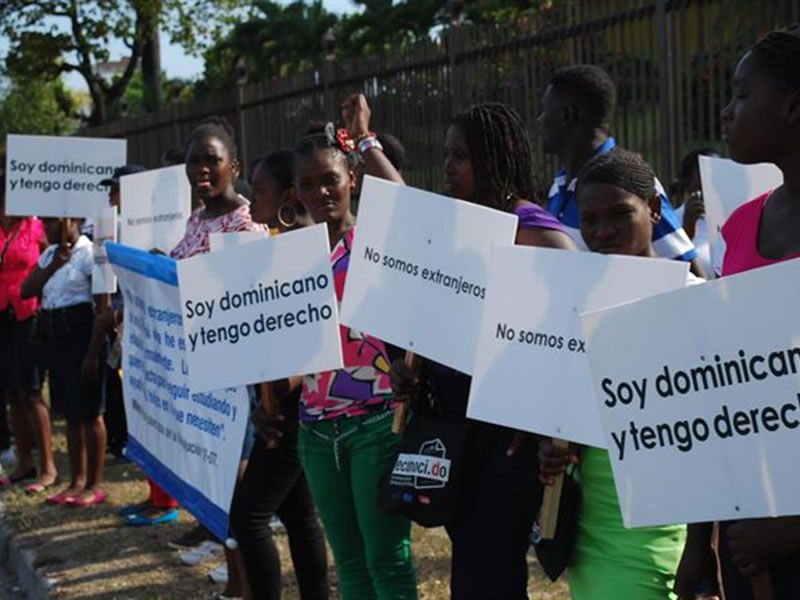 A short while ago I had the chance to visit the stunning apartheid museum in Johannesburg, where the oppression and violation of black population’s rights in South Africa during the apartheid regime is showed in a very visual way. I particularly remembered the Dominican population of foreign ancestry (Haitian), which was **retroactively stripped off its nationality in September 2013 by the Constitutional Court of Dominican Republic through the Sentence 163/2013.**

The consequences for approximately 250.000 people were dreadful since one cannot, for instance, have access to basic social services, sign a work contract, go to the university, travel abroad or get married without having an identity document. The Sentence was sending these people to a juridical limbo. “Being undocumented is being dead,” points out Altagracia Medina from the movement Reconoci.do, an organization that brings together those that have been affected. “The major disgrace is being poor, black and coming from a batey” (neighborhoods inhabited by Haitians that work as sugarcane cutters), adds Rosa Iris, also from the movement Reconoci.do.

++++ “Solutions” for the affected ones

Mobilizations from social organizations and numerous pronouncements from international organizations of Human Rights led to the endorsement of the Act 169-14 on Special Regime and Naturalization in may 2014. Not totally satisfactory for those affected by the Sentence, this law supposed a step forward.

The Act identified two categories among the affected population: group A, consisting of people that were born in Dominican Republic and registered in the Registry Office, and group B, those unregistered Dominican Republic-born. To the people from group A law expressly recognized their nationality without having to follow any administrative process. Nevertheless, and according to the people, in many cases the Central Electoral Board (Junta Electoral Central) denied birth certificates by withholding documents and by establishing requirements and procedures that went against what was established in the Act.

People from group B had to prove –through documentation– that they were born in Dominican Republic and then register in a Foreigners Book that would allow them to be regularized. Two years later they could request their naturalization. The law referred to the Regulation 250-14 of July 23rd, which established the procedural requirements and defined a three months window –later extended for three months more– to begin with the processes of regularization. These windows ended definitely on February 1st.

As pointed out by the affected ones, gathered around the Plataforma Dominican@s por Derecho and the Movimiento Reconoci.do, the implementation of the law has been an definite failure. Only 7.855 people, from the 50.000 that could embrace the naturalization plan, made the request. This is due, among other things, to the multiple bureaucratic obstacles, the misinformation, the schedule restrictions, and the shortage of authorized offices.

Thousands of people are now without documents of identity, with a “formalized” statelessness, without the protection of a state that takes responsibility of them, and facing a high risk of being deported to Haiti –a country in which they were not born and that they have never seen, explains Roque Feliz from the Centro Bonó. In fact, different organizations have denounced the massive deportations that are being carried out by migration agents who go after an ethnic profile and don’t take the time to check the documentation of the people.

++++ A wave of hate and xenophobia

Currently the island is experiencing an alarming wave of hate and xenophobia. The emergence of violent actions of different kinds has augmented the division within the population. Also, threats and acts of intimidation against people from Hatian ancestry as well as against journalist and people defending the rights of this population have increased.

Today, March 21st, is the International Day for the Elimination of Racial Discrimination. It is an opportunity to raise the voice about this apartheid in Dominican Republic and to renovate our commitment in building a world of justice and equality in which there is no space for xenophobia or intolerance.

++++ The urgency of adopting new measures

In this context, the situation of those Dominicans of Haitian ancestry has not been resolved. “The Act 169-14 has left us in an undefined condition that authorities haven’t completely clarified,” claims the Movimiento Reconoci.do

The adoption of measures that are realist, efficient, and in conformity with Human Rights is urgent. It is required to eradicate the discriminatory practices that are being produced by the public administration in order to recognize the nationality of the people that are registered and to reach a fair solution –according to the International Law– for the unregistered ones. As Juan Alberto Antuam, a person affected by the Act, points out, “we are not begging for rights, we are demanding something that belongs to us.”

Besides being a symbol of the violation of rights against the black population, the apartheid museum in Johannesburg represents the social movements’ struggles for their rights –without recurring to hate or vengeance. Hopefully, in Dominican Republic and many other places in the world, these social movements will keep fighting peacefully to obtain justice and equality for everyone. We will be there to support them.